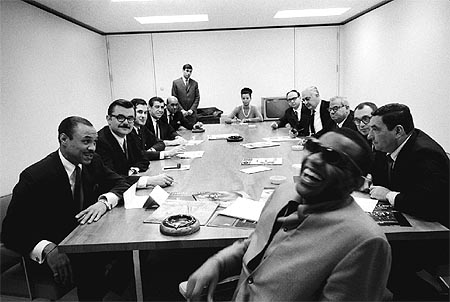 In the last quarter of 1964 ABC-Paramount made full preparations to release a compilation album titled Ray Charles Sings For You – the liner notes were compiled, the artwork was ordered, the release numbers for the mono and stereo versions (ABC-Paramount #500 A&B) were claimed, and the following tracks – until that date all only released as singles – were selected:*

Instead, the September 1964 live concert at the Shrine Auditorium was issued: Ray Charles Live In Concert (ABC-Paramount 500, January 1965).
Ray Charles fans had to wait until the His Greatest Hits (Uh-Huh) anthology (1992, remastered by Steve Hoffman) to collect most of the tracks, or until the Genius & Soul – The 50th Anniversary Collection (1997) to lay their hands on all of them.

Remastering guru Steve Hoffman, who spent many hours with Brother Ray, and the source for this information, also reveals that Ray Charles “hated” the live album.
Hoffman believes that Ray felt the Shrine gig “was an off night for him. He owed ABC an album and couldn’t come up with it for reasons we all know. At first ABC was going to issue a compilation of leftover tracks as ABC-500 but ended up doing the […] live concert thing with the same number.”

With “reasons we all know” Hoffman is suggesting that Ray’s drugs issues (1965 was the year he kicked heroin) were the cause of the suggested inability to come up with a new album.
That’d be a surprise. First and foremost, the live album was a brilliant release. What was there to hate? In fact, it seems more feasible that “[…] Ray himself decided to record the show”** at the Shrine.
Secondly, in these years Ray simply didn’t release compilations of singles; all his new albums contained new work, so he much sooner may have hated the idea of a compilation.
Furthermore, in retrospective, 1965 turned out to be one of Charles’ most productive and creative years. This was the year he started producing his records in his own studio. His detox wasn’t very time consuming, he didn’t tour at all and just took a few TV & film gigs, so he had all the time in the world to work his ass off at RPM.

I suppose the artwork and liner notes for the unreleased album have been archived at RPM. It would be nice if the Ray Charles Foundation publishes them.

* With obvious corrections of erroneous titles. **Michael Lydon in a review of the extended live album.