When a recording artist dies, their record company always gets squeezed between their (and the artist’s heirs’) commercial interests and their integrity. The questions they usually (have to) ask themselves are: Should we issue these songs, although the artist didn’t explicitly approve any release? Should we (re)mix those tunes to our own tastes, since the artist didn’t finish them himself? Should we release these finished tapings, although the artist didn’t think they were good enough for a release? Should we delve through our vaults, to see if there are any outtakes that are worth a release – although they were never meant for that?
After Ray Charles’ death, all kinds of good, some questionable and incidental bad things happened with his musical legacy.

Genius Loves Company was a triumph at Starbucks outlets, on the charts and at the Grammys. And Ray, the soundtrack, was a neat and relevant selection from his best work. What even was better, was that Ray worked on both projects while he was still alive, and – as far as I know – consciously approved, or at least endorsed, the end results.

The relevancy of More Music From Ray, the latter album’s sequel, was less clear. It contained some more film tracks that were left off of the first collection (okay), plus some non-movie songs said to inspire the film (odd). But it also had a great surprise for hardcore fans, where it also entailed three new studio takes, film dub tracks for which no other appropriate recordings existed (marvelous), and also sequences where Ray accompanied Jamie Foxx on piano (documentary value).

Pure Genius from 2005 was almost everything a Ray Charles aficionado could dream of when it comes to a compilation: an abundant overview of his work for this label, liner notes with a reasonable quality, a series of lovingly compiled raw studio outtakes from his Atlantic period, and a great video bonus (the Newport 1960 concert) – all in a carefully designed box set.

Ray Sings, Basie Swings (2006) combined archival vocal recordings (taped during a European tour in September 1973) with new performances by a current (2006) Count Basie (Show) Orchestra. Charles was singing his guts out (his voice was probably never better than in the mid 1970s!), but adding the Basie b(r)and to this production was just a marketing trick. The new arrangements lacked balls, and the ensemble lacked the personality of Charles’ best orchestra line-ups (a Ray Charles All Stars band and any choice of the historical Raelettes would surely have done a much better job). Combining Charles with Basie in this way, to my taste, came dangerously close to the lack of respect and integrity that more recently infuriated Pat Metheny so much in another case of over the grave-artistry.

Recently, Rare Genius – The Undiscovered Masters  (2010) was another post mortem album release. In itself the release of unknown tracks was good news, of course. But I would have appreciated it if the compilers had made their selection criteria much more clear. Ray was one of the inventors of thematic record albums, but this album was overly theme-less. And as a fan I was disappointed in my expectation that I also would get the opportunity to listen to the pure original, Genius-mastered takes, without the “sweetening” make-over additions – which, to my taste, again were produced with too many outsider studio musicians!

In between all these releases there were all kinds of straight forward, plainly commercial re-releases of other Ray Charles albums and compilations that I won’t discuss here. Some of them presented Ray in his original form, some others offered remastered originals. Nothing wrong with that.

And then there was Genius And Friends, from 2005. 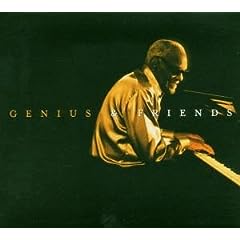 According to Rhino/WEA’s press kit, they took a series of studio tracks that Ray had been working on in 1997 and 1998 as a basis for this album, and fused them with vocals by contemporary artists to create another duet album. The album was presented as the end result of a project that Charles initiated a few months before his death. Ray had called James Austin in December of 2003, asking if he could find the masters of an unreleased duets record. Still according to the same Rhino publicity rap, Charles was too sick to work on them, so after his passing the company decided to finish off the project, bringing in producer Phil Ramone to oversee the completion of the album. This also included bringing in singers to record their parts, since apart from the 1991 duet with Diana Ross on Big Bad Love and the live 1991 version of Busted with Willie Nelson (taken from the television special Ray Charles: 50 Years In Music, Uh-Huh!), these were all studio artefacts, with vocalists duetting with a previously recorded Ray. Ramone edited the new recordings with the existing tapes.
It rarely sounded as if the vocalists were in the same room together. To real fans, a critic wrote, the album was just a painful reminder that The Genius had left the building.

But there’s more to this story.

In an interview by Sandra Cesarale in the Corriera della Sera of 27 July 1999 Ray stated that he was working on a record project to be released in September of that year, produced by “my friend Quincy Jones”, where Charles would sing with “the young Brandy”, George Michael, Stevie Wonder, and Gladys Knight. “But in [this] project I also want to involve the queen of disco music: Gloria Gaynor.”

When Genius And Friends was first announced on Amazon (on 25 May 2005) the published track list was:

Track #7 clearly refers to the missing duet with Stevie Wonder, probably more specifically to a release of their magnificent performance of Living For The City during the Ray Charles: 50 Years In Music, Uh-Huh! show in 1991. It’s a riddle with whom the duet on You Leave Me Breathless was (planned to be) recorded. Gaynor? Brandy? One of the other artists mentioned in the Fox News article quoted below?

The disappearance of Brandy and Stevie (and possibly also of some other artists) from the track list may have had all kinds of good or less good (business) reasons (e.g. the refusal of their own record companies to clear their collaboration on this album), while Patti LaBelle’s contribution may just have been an incidental matter of bad judgment by the producers (it’s very hard to conceive that Ray would have ever even allowed her access to RPM Studios). But on 29 August 2005 Fox News published a story by Roger Friedman, titled ‘Genius II’ Loves Trouble, that suggested more serious problems. The narrative is clearly based on gossip, and I have seen better fact checking, but the writer’s sources must have been people close to Ray and RPM who were truly concerned about the integrity of the whole project:

“Don’t get too excited about those announcements last week of a “new” Ray Charles duets album. I’m told there’s trouble brewing on this project that has not been addressed.
Earlier this year, Charles won a posthumous Grammy award for his Genius Loves Company album on Concord Records.
That was a collection of digitized duets, but the combination of Charles’ untimely death and the movie Ray […]drove the CD to sales of 3 million in the United States. It caused a Ray Charles renaissance of the first order.
So, what to do? Some at the Charles estate [this most probably refers to Joe Adams, BS] wanted a Genius II but the tracks didn’t exist. Then someone remembered that Charles had recorded a bunch of duets years ago and hadn’t released them.
The original tracks were recorded for Quincy Jones’ now-defunct Qwest Records […].
Estate insiders thought: Wouldn’t it be a great idea to release these duets? Maybe. But apparently they also felt the original collaborators were no longer relevant or commercial enough to market.
Charles’ collaborators on those tracks included Brandy, Brownstone, Chuckii Booker, B.B. King, En Vogue, Faith Evans and Stevie Wonder. In fact, there’s supposedly a duet between Wonder and Charles on Living For The City that’s supposed to be spectacular.
Critics of the Charles estate, however, tell me there’s such a clamor to make more money from the deceased legend that insiders have gone too far this time. Apparently, all those artists who actually recorded with Charles in the studio have been “erased” and their vocals replaced by Patti LaBelle, Diana Ross [wrong info; the duet Big Bad Love was taped and released by Ross in 1991, BS], and other artists considered bigger stars now.
It is not known whether the original singers have been notified that their vocals have been eliminated.
Two of the new vocalists are Alicia Keys and Ruben Studdard, neither of whom Charles even knew [at least partly wrong, Ray consciously contributed to Keys’ – awful, awful – rendition of America The Beautiful, especially produced for the 2003 Super Bowl halftime show, BS], critics charge. Additionally, there’s the matter of LaBelle, who – though revered by many – was not particularly liked by Charles.
Wonder, I am told, declined to sign off on releasing his duet for this new weird collection.
All of this may come as a shock to Atlantic Records chief emeritus Ahmet Ertegun, whose name was used in the press release announcing the album on Rhino Records. You can still find Internet references to an album called Duets, which Rhino declined to release in 1998.
The release claimed that Ertegun was fulfilling a “deathbed” promise to Charles to put out his material. But since Charles had not recorded for Ertegun since leaving Atlantic in 1959, that claim may be dubious at best [wrong for several reasons, but mainly because Atlantic actually was involved in releasing the album through Warner-Elektra-Atlantic, or WEA for short, BS].
It’s nothing new that dead artists are exploited. Charles seems destined to join Jimi Hendrix, Janis Joplin and countless others now that he’s gone to his great reward. I’m told he left behind hundreds of unreleased recordings that should provide lots of legal tangles.”

Also read this article for the point of view of Ray’s children.

However, let us pray that the remainder of Ray’s musical legacy will be treated with much more respect. And integrity. There’s still a lot of work to be done!