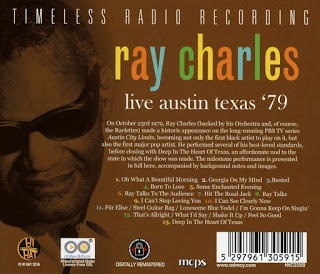 Complete digital audio bootlegs of Ray Charles’ Austin City Limits TV concert, originally taped on October 23, 1979, have been circulating on the web since the late 1990s. For free, in a very decent quality. It’s still easily and freely available through torrent websites.
Nevertheless, Hi Hat, an obscure British-Cypriot record label, found a reason to issue the concert on CD (announced as a “remastered, unofficial release”). For an indiscernible reason, the majestic version of Oh, What A Beautiful Morning was mutilated.* The least essential information I aggregated in this articleand on this page was used for the liner notes.**

*According to Joël Dufour in Soul Bag #225. **Special thanks to André Monnot for sharing a copy of the CD booklet.