Ray Charles And The Florida Playboys, A Short Adventure 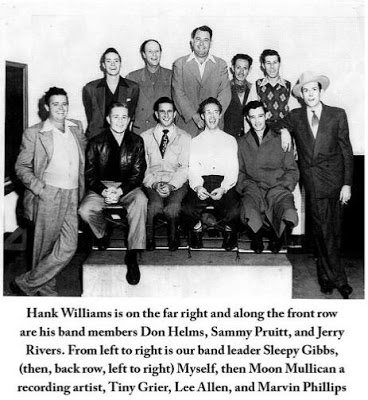 Ray Charles loved to reminisce about his earliest endeavors in country music. Shortly after his seventreenth birthday, in 1947, he landed a gig with the Florida Playboys. In Michael Lydon’s biography, Ray Charles – Man And Music, the story is that “[o]ne audition convinced the Playboys that RC could play country music with a genuine flavor, and they hired him, no questions asked about race. For several months he gigged with the band, playing current country hits like Kentucky Waltz in white honky-tonks in and around Tampa, learning to yodel, and singing Waiting For You as his featured number. […]. RC’s interlude with the Playboys, though brief, planted a seed in Ray Charles’ music that would lie dormant for a decade before sprouting. Yet this important event has left barely a trace in any but Charles’ own memory. Gossie McKee and Manzy Harris […] nor Ray remembered any names. […]. The histories of some bands, however, are written on the wind, and the other Playboys may have forgotten the nights with RC […].”

Of course, it were not the Playboys who were crucial for Charles’ love for country music. That came from listening to the radio, especially to WSM‘s Grand Ole Opry shows, ever since he was a toddler.

Up until recently, all efforts to corroborate Ray’s vague memories with contemporary sources have failed (including mine, miserably). But in 2013 Marshal Rowland, a former steel guitar player and an owner of radio stations in Georgia and Florida, published his memoirs, Fertilizer ‘tween my toes, a true story about a country boy finding his success and happiness in country music and owning radio stations.*
Rowland remembers how he was a fan of “Tiny Grier and the Florida Playboys on the radio on a station [WJHP] out of Jacksonville. […] They came on [live] twelve thirty every day”. After finishing highschool, he decided to contact Grier. “The band had hired a young black fellow named Ray Charles […]. He had tried out and played with them for a few days and then abruptly left. About the same time he left, two others, PeeWee Jenkins and Cliff Austin, also left. [Grier] told me he needed musicians to keep his band going and the radio program alive and well.”
“A few days” is a better match with Ray’s early career timeline than the “several months”-reconstruction by Lydon. Obviously, his adventures with the Playboys were limited to a part of October 1947.

In this interview Ray shared a few more memories.

The daily Playboys radio show on Jacksonville’s WJHP is a new detail in Brother Ray’s Playboys legend. It’s highly probable that Ray participated in at least a few of these broadcasts.
Rowland described the show’s format as it was during his membership of the band: “In a typical thirty-minute program, usually the leader Sleepy Gibbs would sing two or three songs and Marvin Phillips, Tiny Griers son-in-law, would also sing two or three songs. The steel-guitar player and the fiddle player, Luther Moore, would each play one or two numbers […]”.

*Many thanks to Joël Dufour for sharing this information.