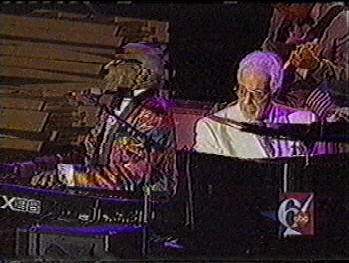 In a Keyboard Magazine interview Ray Charles, when asked about his favorite pianist, was quoted as saying, “Art Tatum could play anything he wanted to. He’s one of the few people who I truly believe could play anything he thought of… and Peter Nero plays his buns off!”
Probably the first time the two of them met and played together was at The Dinah Shore (Chevy) Show in 1963. Here’s the finale of that show, where Dinah Shore, Ray, Liberace, Peter Nero and Big Tiny Little perform Zip A Dee Do Dah (at 54.39):

On 18 January 1996 Nero invited Ray to perform at the Florida Philharmonic Pops benefit at the Broward Center for the Performing Arts. The audience response was so good, that the invitation was repeated exactly one year later.
In aninterview published by AllAboutJazz on 8 July 2009, Nero shares his story on the ’96 Pops event:

Q: “It’s interesting that you mention Tatum, because Ray Charles once compared you to Tatum in terms of your ability.”

A: “Ray Charles has always been very good to me in the press, going back to the early ’60s, when I started to record. And then we finally linked up and met and played together. From about 1991-2000, I ran the Florida Philharmonic Pops, and they had a gala with their music director conducting, and I performed the Rhapsody In Blue on the piano, and then Ray came out for the second half with his conductor, and asked me if I would sit in with him. So we did a duet in which he played organ and I played piano. It was an experience I shall never forget, and it was repeated after that.
At that particular concert, we did an A-flat blues. He set it up so he had an organ bench and I had a piano bench, right next to each other at a 90 degree angle. Ray, playing organ, faced the audience, and I was seated in the usual piano position facing stage left. He gave me a big intro, and we just comped the blues, and he soloed first. And our shoulders were touching, my right shoulder touching his left. So I’m just comping for his solo, but now comes my turn to play choruses, and he’s comping for me. And as you know, he’s very vocal, moaning and groaning, and then when he likes something I’m doing, he digs his left shoulder into my right shoulder, [laughter] so my right foot is on the pedal, but my left foot is on the floor trying to keep Ray from pushing me off the bench [laughter]! It was really fun, just a great experience.”

On 4 July 1997 Ray was on again, in a concert on the Philadelphia Art Museum steps, with Peter Nero and the Ray Charles Orchestra. Nero, in the same interview, puts the wrong year to it, but his anecdote is funny and interesting again:

A: “A couple of years later, we had a Fourth of July concert in Philly at the Parkway, with around a million people attending. Ray had his own band on that one. Interestingly, there was a problem in Ray’s written contract with the city. In writing it, they neglected to put a few things in there. One, they wanted him to do America The Beautiful. And more importantly, they made no mention of the fact that it was going to be telecast locally. When he found out about the mistakes, he said he would only do 15 minutes unless he was properly remunerated for performing that song and for the TV hookup.
He was angry they didn’t tell him up front, and felt they were ripping him off. The city called me and asked me if I knew Ray. They claimed ignorance about negotiating a theatrical contract. Understanding that it was an innocent slip up, I emailed him and told him, “You’re right (which he was), Ray – but please understand it was an error and not a devious one.” But when it came time for the show, nobody knew for sure what he was going to do. So at the concert, I did my segment with the Philly Pops, and then joined him in his trailer while another act went on. We just talked in general, not about the contract. The bottom line was that not only did he do the whole 45 minutes they wanted, but another five minutes or so doing the blues duet with me. And then he did America The Beautiful. When I got home, the city representative had left me an answering machine message saying, “I owe you one!” But it was really Ray’s generosity – that when he understood what the situation was, he came through.”

Q: “I remember that performance of America The Beautiful. It was one of the most memorable things that ever happened in Philadelphia. […]”

The TV station implied in the story above was the local ABC 6 channel.

I’ve watched a VHS copy of the 6 ABC/WPVI broadcast. The soundmix wasn’t fantastic, but Ray and the band were in a good mood. Ray visibly highly enjoyed Peter Nero’s contribution to #11, Blues For Big Scotia. The celebration of Independence Day of course justified the unusual encore with America The Beautiful.

The instrumental, BBC (#1), was written and arranged by Bob Florence.
The personnel of the band and the The Raelettes was identical to the line-up of the group that toured Europe from July 6 to August 2 (cf. this).

Wolfgang’s Vault has released a (superior) audio-only recording of this concert. I guess this YouTube audio-only copy was extracted from that: