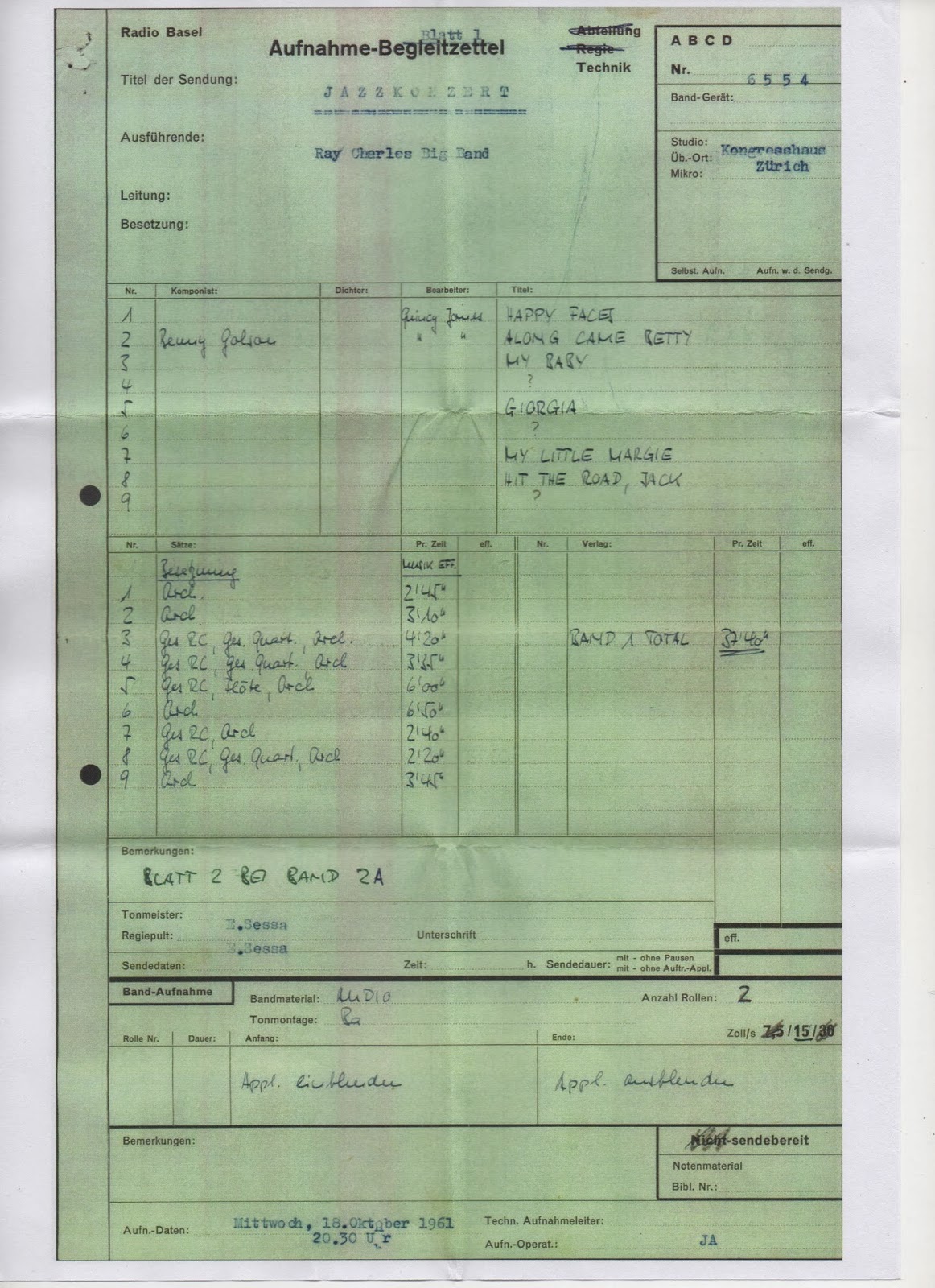 The Ray Charles Big Band’s First Concert In Europe (1961) was recorded by Radio Basel (now part of Radio SRF 2 Kultur). My inquiries at their archives have resulted in the discovery of a set of 2 edited tapes with parts of this  “Jazzkonzert” by the “Ray Charles Big Band” at the “Kongresshaus Zürich” on “Mittwoch [Wednesday] 18. Oktober 1961” at 8.30 p.m. The tapes entail 22 tracks with 18* of the tunes that were performed that day:

Status
The archived tapes probably do not represent the order of the original setlist. The band-only instrumentals (#01, 02, 06, 09, 12, 15, 18) were almost always played before the intermission. At the end of #6 (Blue Stone), though, you can clearly hear Ray Charles say “All right!”, which makes it probable that for this song The Genius played one or more of the solo parts on alto (just as he did in 1962, in Paris).

After #8 one can hear Ray call for “I Got News”, and after #11 for “Hallelujah I Love Her So”. From a contemporary review in Le Matin – Tribune de Lausanne, and from handwritten notes in the souvenir brochure of Hans Philippi, one could conclude that Alexander’s Ragtime Band, Let The Good Times Roll, Moanin’, and What’d I Say (and possibly Whisper Not) were also on the Zürich setlist…

The quality of the (mono) recording is excellent (though, a bit unfortunately, the ‘audience noise’ was suppressed almost completely).
Assuming that Radio Basel at the time has broadcast the tunes in the order of the tapes, it’s impossible to conceive what kind of storyline the program maker was following. Historical importance
This, so far, is the first-ever recording of the Ray Charles big band. The troupe appeared in its second known line-up, but sounded very well rehearsed (Ray’s old small big band still formed the nucleus of the group)**. The ensemble play was very tight. Since Ray Charles only played piano, not Hammond, at this gig, the sound of the band as a whole is radically different from the concerts that were staged 2 days later, in Paris.
Misty (#15) is the only known live recording of this song by the Ray Charles Orchestra. Crawford’s original studio version is known from his 1961 album More Soul (Atlantic SD 1356; the tune was also released as a single on Atlantic 45-5013), but this wonderful rendition is even more soulful. The tune’s occurrence on the setlist is unexpected (it was e.g. never mentioned in any contemporary souvenir brochure’s repertoire list).***
The extended outro of #4 (Sticks And Stones) sounds a lot like some early live versions of I’ve Got A Woman. As to be expected, #11 (Come Rain Or Come Shine) got yet another bone chilling rendition with Don Wilkerson on tenor. #10 and #14 are very early live recordings of I Remember Clifford, with an excellent solo on flugelhorn by John Hunt, and I’ve Got News For You.

Unfortunately My Bonnie was omitted from the 2016 CD release:

Special thanks
To Mario Schneeberger, who put me on the right trail, and to Peter Bürli, Redaktionsleiter Jazz at SRF 2 Kultur, who kindly allowed me to listen to the Radio Basel tapings.

*Announcements to some of the tunes were edited on 4 separate, numbered tracks (left out from the list above).The two tapes (with resp. #10-18 on tape “1” and #01 – 09 on tape “2A”), are archived by SFR under ID number BS_MG_FLU_6554_K01. ** Actually, with the exception of the July concerts in Antibes, Ray played that year with an “augmented” orchestra [i.e. big band] from April to December. *** Brother Ray recorded Misty much later, playing piano, with Steve Turre (album: In The Spur Of The Moment (Telarc B00004TUOZ, 1999).