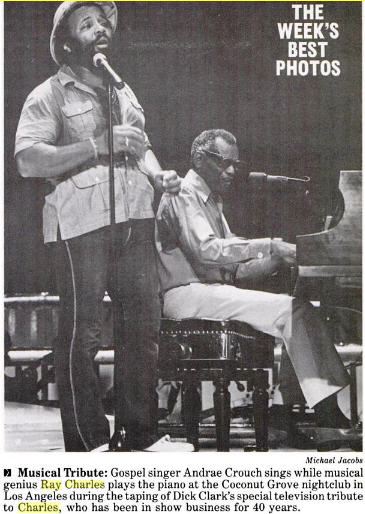 Ray Charles – A Man And His Soul, A 40th Anniversary Celebration was a 2-hour special television tribute, celebrating Ray’s 40 years in show business, taped at the Cocoanut Grove club in LA in the early summer of 1983, produced for national syndication by The Dick Clark Company for Multimedia Entertainment. The show was directed by Gene Weed. 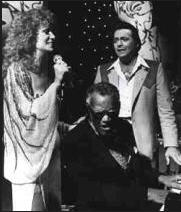 People from 5 September 1983 announced that “At 52, Ray Charles is still hitting the ivories and belting out the blues with timeless authority. And to celebrate his 40th year as a performer of jazz and soul, 500 of Charles’ friends and fellow musicians showed up […]”.
Among those who sang Charles’ praises were Glen Campbell (duet), Lou Rawls (duet), Engelbert Humperdinck (duet), Dottie West (duet, and another song with Ray and Mickey; see photo below), Joe Cocker (duet), Andrae Crouch (duet as seen in photo from Jet magazine from 19 September 1983, and duet with choir), Dick Clark, Mickey Gilley (duet), and there were special appearances by Rev. James Cleveland, Quincy Jones, Barbara Mandrell, Smokey Robinson, and – by prerecorded message – Stevie Wonder, doing Hallelujah, I Love Ray So.
The show was filmed during two consecutive nights (the band wore black tuxes on the first night and white tuxes on the second).
Also look here for a contemporary news paper article with photos from the show, implying an earliest-known air date of 30 October 1983. 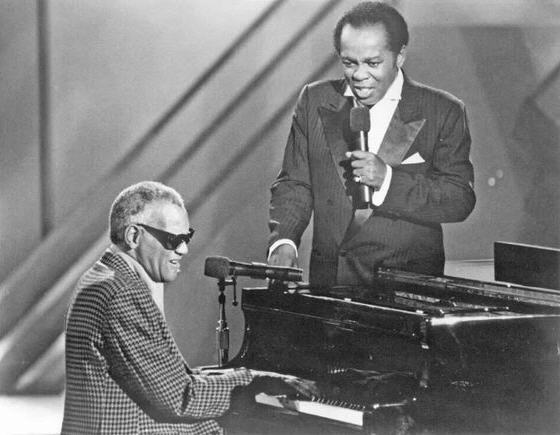 The order of the songs is yet unclear to me. Below I’ve clustered them based on stage specs and what Ray was wearing, and – partially – following a messy video edit of parts of the show.
The identified songs were on YouTube the last time that I checked on them:

* Sequences from Stevie Wonder’s song were accidentally also filmed, from different angles, for the documentary I Love Quincy (1984).

The segment with Glen Campbell: