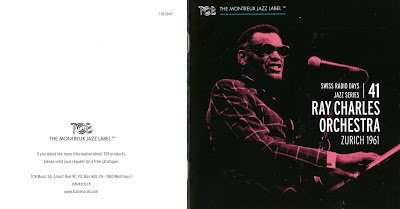 A while ago my inquiries at the Swiss Radio archives resulted in the discovery of a set of 2 edited tapes with parts of a Jazzkonzert by the Ray Charles Big Band at the Kongresshaus in Zürich, on October 18, 1961.
This concert is now part of an abundant “Swiss Radio Days Jazz” CD-series with post-WWII radio concerts, issued by TCB, “the Montreux Jazz Label”, a sub label of Challenge Records.

Any new album with Ray Charles materials is good news (especially when the songs originate from the early 1960s), and this was an excellent concert. But… well, let’s say that this one is far from perfect as a CD release because, unfortunately and without due respect, an awful mistake was made, and the liner notes are crap.

The notes lack any relevant historical context (but you can go here to compensate that). They include nonsense, for instance a complaint about the quality of the original recording not doing “full justice to [Ray Charles’] piano playing, at times strangely behind in the mix of the time…” – pointing at the instrumentals where Ray, as per usual, simply didn’t participate. And they include many factual mistakes (like attributing the arrangement of Come Rain Or Come Shine to Quincy Jones; a similar attribution i.c. Ray Minor Ray is questionable at least).

Ray Charles Orchestra – Zurich 1961. TCB (Swiss Radio Days Jazz Series #41), [2016]. The CD is also streamed by Deezer (probably only in Europe).
For sale through most European music webshops and, as long as the rights owners allow it, also via Amazon USA.

I appreciate your respect for the band. Up to 4 or 5 band-only-instrumentals was perfectly normal in +90-minutes concerts throughout RC's live carreer from 1961 onwards. Many more examples have survived (see elsewhere on this blog). Unfortunately, only few (audio/video) releases paid any attention to them.

I understand your criticisms, and respect them. But as an average fan encountering this release, I was blown away by the presence of the band on this recording, and the generous amount of stage time given them. It's a much different live release than I'm used to, certainly not in the same mould as the Newport and Shrine Auditorium recordings that one encounters so frequently. Much less goofing around by Ray, and a lot more blowing by the band!