The Things That I Used To Do (By Guitar Slim, Ray Charles On Piano)

Recorded in New Orleans at Cosimo Matassa’s Studio on 27 October 1953.
With Lloyd Lambert’s band (including Charles Burbank, Joe Tillman, and Gus Fontenotte on saxes, Frank Mitchell on trumpet, Lambert on bass, Oscar Moore on drums), helped by Ray Charles (who had been working with Slim since late August), arranging the song, filling in on the piano, and producing. Engineered by Cosimo Matassa. 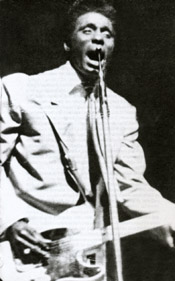 “Flamboyance was the nature of Guitar Slim. He was known to wear specially-tailored, brightly colored suits with shoes and dyed hair to match. An assistant would follow him during his shows, carrying up to 350 feet of guitar cord, just in case Slim would decide to walk through the audience without missing a note. On occasion, Slim would ride on the assistant’s shoulders. He would sometimes take these strolls outside the club and into the streets, where it was not unusual for him to bring traffic to a halt. It was after witnessing a Guitar Slim performance, that would seal the fate of a young Buddy Guy to decide to make the Blues his living. Guy would state in his autobiography, “[…] When I saw him, I’d made up my mind. I wanted to play like B.B. (King) but act like Guitar Slim.” […]
Guitarist Earl King claims that Slim said the song came to him in a dream, where a devil and angel fought each other with their own sets of lyrics. Of course, it being a blues song, the devil’s lyrics had won out. [Specialty’s] Art Rupe hated the song when he first heard it, but released it as a single anyway. It would ride the R&B charts for 21 weeks, six at number one, and would sell over a million copies. […]
The Things I Used To Do still remains a strong blues standard […]. It has been honored by The Blues Foundation as a Classic of Blues Recording in their Hall of Fame.
Due to his unfortunate early demise, the world will never know how great Guitar Slim may have been. Those who knew him have no doubt of his greatness. Earl King places him on the same scale as B.B. King and Ray Charles. You need look no further than those who have named him as a major influence to see the truth: Albert Collins, Chuck Berry, Jimi Hendrix and ZZ Top’s Billy Gibbons are only a handful of this countless number. […]” Also read this.