Was It Chubby Wise That Ray Charles Played With In The Florida Playboys (1947)? 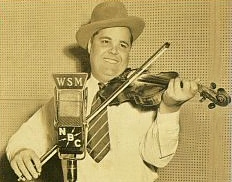 See this for update.


NOTE 10 October 2011:
Inthis threadfrom 2000 on RootsWeb another, and much more substantiated, story about The Florida Playboys seems to unfold. The main participant in this discussion is the daughter of “Tiny” Grier, one of the Playboys. She has informed me that she has recently resumed doing further research on the band, and hopes to share the results when she is ready with it.

Ray Charles loved to reminisce about his earliest endeavors in country music. Shortly after his 17th birthday, in 1947, he landed a gig with The Florida Playboys*. In Michael Lydon’s biography, Ray Charles – Man And Music, the story is that “[o]ne audition convinced the Playboys that RC could play country music with a genuine flavor, and they hired him, no questions asked about race. For several months he gigged with the band, playing current country hits like Kentucky Waltz in white honky-tonks in and around Tampa, learning to yodel, and singing Waiting For You as his featured number. […]. RC’s interlude with the Playboys, though brief, planted a seed in Ray Charles’ music that would lie dormant for a decade before sprouting. Yet this important event has left barely a trace in any but Charles’ own memory. Gossie McKee and Manzy Harris […] nor Ray remembered any names. […]. The histories of some bands, however, are written on the wind, and the other Playboys may have forgotten the nights with RC […].”

Searching through Google’s historical newspaper database, however, leads to one little article in the St. Petersburg Times from May 13, 1945, reporting how the “Tarpon Springs Legion Boosts War Bond Sales”, through an event where the music was performed “by Chubby Wise and his Florida Playboys”.

Robert Chubby Wise (October 2, 1915, Lake City, Florida – January 6, 1996) was a well known American bluegrass fiddler (also read this and this), who, through his career, played in and with many bands, sometimes even in several bands at the same time. The second-oldest article I found about him was in Billboard from 12 June 1948, describing how “Clyde Moody, Chubby Wise, the Wheeler Bros, and Red Seal are featured as the Radio Ranchmen in half of a two-hour show daily over WARL, Arlington, Va”.
According to his biography, he joined Bill Monroe’s Blue Grass Boys in 1942, and “performed and recorded with the band through 1948”. So leading the Florida Playboys must have been something he did on the side.

Of course the phrase “by Chubby Wise and his Florida Playboys” is ambiguous – it may also refer to two separate acts. And of course the gap between the St. Petersburg Times squib from 1945 and  Ray’s vague memories of his Florida Playboys gigs in 1947 is way too big to postulate that Charles and Wise have played together, but listening to Wise‘s specific bluegrass style can give a slightly better idea of the music that Ray may have played in this band. In a Times orbituary, Chubby’s music of this period has been described as “a mixture of the drone double-stops of mountain music, the bent and sliding notes of rural blues and a speedy, swinging, daredevil virtuosity”.

This fan has shared loads of Wise tunes on Youtube. For more on Chubby, also read this book and this post.
* In the ’30s and ’40s “Playboys” was afrequently used element in group names for bluegrass/hillbilly bands.