We Are The World (With USA For Africa) 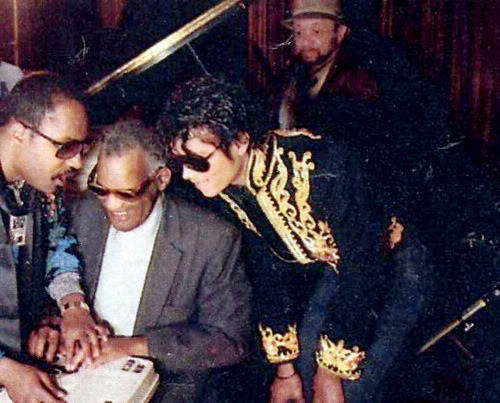 We Are The World was a charity single originally recorded by the supergroup USA For Africa in 1985. It was written by Michael Jackson and Lionel Richie, and co-produced by Quincy Jones and Michael Omartian. 45 artists participated.
Single (A): USA For Africa, We Are The World, Columbia US&-04839, 1985, b/w Grace

One of the legends around the production of the single says that in the studio they were greeted by Stevie Wonder, who proclaimed that if the recording was not completed in one take, he and Ray Charles would drive everybody home.

In this marvelous making of-footage we see Ray “dancing” his fantastic solo contribution to the song, plus we hear him give some statements (and we hear him strike a few piano notes during a break). An extra heart warming and funny sequence is when the superchoir bursts out in a spontaneous Day-O (The Banana Boat Song).

The footage below comes from the TV documentary We Are the World – The Story Behind the Song, directed by Tom Trbovich, a behind-the-scenes look at the night of 28 January 1985. The film was released on DVD several times; the best edition is the one with the tagline 20th Anniversary Special Edition;  Image Entertainment, 1 February 2005.

NBC reported extensively on the recording session on 28 January 1985. The news item had two sequences with Ray: one “in interview near others”, the other where he sings his solo in the song. Source: NBC News Archives, ID NY-TDY-20050126-0001. For other audio and video productions and releases see this Wikipedia article.

During their 1986 tour Ray and The Raelettes played the tune live several times (see the first three live links, below).

In his autobiography John Oates remembered:

For instance, participants (they were supposed to check their egos at the door) started getting meddlesome before Ray Charles set everybody straight and told them to just sing the song.

“When he spoke up, everyone listened,” Oates said […]. “Everyone stopped. Everyone got on board. It was very cool. And I was standing right behind him. […] I think he was the only guy that could do it. And, when he did it, it was like ‘the man has spoken’.”